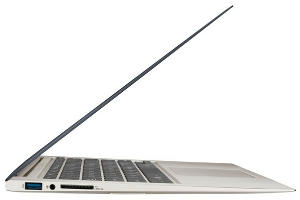 I've finally received my new laptop. It's not the one I initially wanted (the Lenovo X230) since that on costs a small fortune in the configuration I wanted. Well at least it costs a bit too much here in Sweden with all the taxes and what not. Anyway, I settled for an Asus Zenbook Prime (UX31A) and had money left to take the family on vacation instead.

My old laptop (crapdev) has served me well. I didn't even pay for it since I just took it home with me when I received it's replacement at work. Yes, I've been using my old work laptop as a private workstation for the last 2-3 years and it's starting to show.

I named my new toy "jackrabbit" as a nod to the restaurant from Pulp Fiction (Jackrabbit Slim's). With the UX31A measuring only 18 mm at its thickest, and to be fair, 4 mm of those are its rubber feet, I'd say "slim" is the word.

Needless to say, it runs circles around my old laptop. By the time KMS has switched my tty to native resolution, the laptop is already done booting. The BIOS POST actually takes longer than booting Arch Linux on this machine.

Now getting Arch Linux installed on this EFI-equipped machine however, that's a story for another day (or week). Stay tuned.