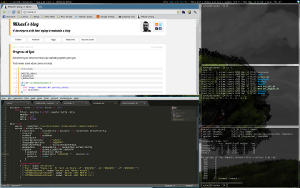 XMonad running on my desktop

Form, function and flexibility. I find that these three concepts are not always easy to rank. Sometimes I feel that form trumps functionality, sometimes I don't. When it comes to window managers however, function is king!

I have to admit, I've been totally ignorant about tiling window managers up until now. I've always wanted my desktop to look nice and I've sometimes gone to great lengths to customize my desktop to be pixel perfect the way I want it. But lately I've come to a realization; mouse pointers suck!

Well most mouse pointers do anyway. I'm a trackball user so I think all regular mice sucks anyway, but now I've started hating trackpads. I've been planning on picking up a new laptop soon (well as soon as the X230 gets released) but I want to be able to use it on the couch without having to rely on a mouse/trackpad/trackball. The Lenovos "nipple-mouse" is about as far as I want to go since it sits smack in the middle of the keyboard.

* Not really a "pun", but "awesome" is the name of another tiling window manager.

If you only could intergrate lactose-intollerance, a slow-loading pinup-jpeg and a 20-sided dice with this...
@rejser: Am I not "geek" enough for you already?
@Mikael Lofjärd: You strayed from the geek-path many moons ago, moving to Stockholm with an interest in decorating. Look at me, I can't get an erection unless it's 14,4k and I have no idea whats loading. That´s geek!
@rejser: +1