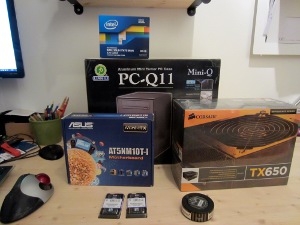 My new, not yet assembled, server.

Now it's up to me to get this thing put together and installed with some tasty Linux/Node.js/CouchDB action.

I also need to learn how to install Linux from an USB flash drive since I don't have any DVDs at home. I almost can't remember the last time I burned a DVD. I think it was roughly a year ago that I burned some photos I had taken at a friends wedding. And even then I had catch up on how to do it.

I fondly remember the old days when one could burn 200+ CDs at a LAN party.

I might have strayed a bit off topic now, so I will retire to my server build.

I'll see you on the other side!